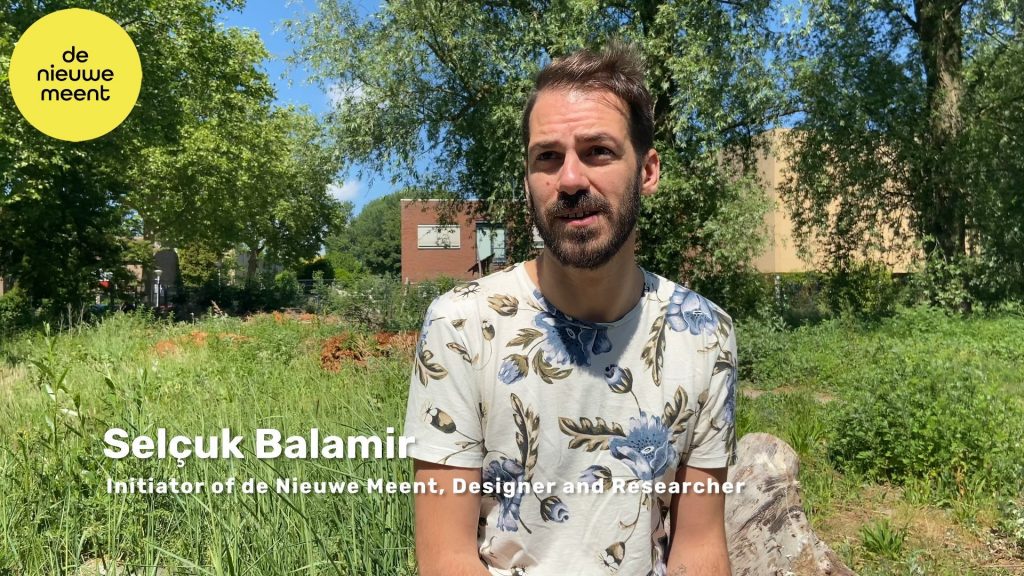 dNM initiator Selçuk Balamir talks about the origins, principles and ambitions of the project, on the location where the housing cooperative will be built in 2021-2022. Filmed at Archimedesplantsoen in May 2020, as part of the “Whole Commons Catalog” project, supported by Gemeente Amsterdam. Interview by Natascha Hagenbeek, filmed by Eva Sierksma, edited by Lukas Heistinger. You can also read the transcript of the interview below!

Where dNM comes from

Currently, I live in a ‘woongroep’, a community project with workspaces, living spaces and public functions. It’s a smaller scale of 11 people and a building we renovated ourselves. Since we finished it, we were wondering “what’s next? How do we continue this effort, and make this even bigger?”. When we saw the tender application possibility from the ‘Gemeente’, we said: “yes, let’s go for it!”. It’s five times bigger, to be built from scratch. This is the next step where we can transfer the learnings we have into a bigger, more ambitious project.

I benefited from years and years of bureaucratic, financial and all sorts of work that people have put into the project I currently live in —and I joined it quite late. The only way I can reproduce the commons is to ‘pay it forward’, by creating another location, other possibilities for other people, even though I may not benefit from it myself directly.

We started with a provocation, saying “we want to build a postcapitalist commune in Amsterdam Oost”. That was quite a good trigger for people to get interested and to get involved. Our imaginations were wild! To combine different aspects, we ultimately synthesised a few principles. It is going to be a project based on commons, based on care, based on [sustainability] and diversity. Now we are at the phase of trying to figure out how to implement those in a more practical way, in everyday life and in the decisions we need to take at this moment in the project, that will last for its lifetime.

The core team has been about a dozen people, which occupied different roles. People that are committed to the city’s cultural and political life in multiple ways; community workers, researchers, activists, organisers and artists. We got together for this, and we are still in the process of launching the admissions. The real members of dNM will be joining in the coming months, and we have community-building workshops running currently.

I’m studying postcapitalist design practices that show instances of ‘commoning’. So practices of commoning have been in my life as a theoretical object of study for all these years. I’ve also been meaning to develop practices where I am myself a commoner. Living environments are the best way to connect multiple ways of commoning practices in one place.

It’s the train station Science Park, behind it it’s the [university] campus, on the other side you have lots of sports facilities, and behind us our nearest neighbours in these social housing blocks. We have been also inviting them to barbecues we organised here on the spot, so that we get to know our future neighbours.

A blueprint for the future

We roughly met every Sunday to develop different aspects of the project, to prepare the tender application, to get to know each other and to build a community. There are a few reasons why dNM should be a pioneering project and a blueprint for future cooperatives. First, because it is proposed as a pilot by the municipality to develop more. The learnings acquired here will be very influential in how the policies will be shaped, how the funding instruments will be created. We do feel like a guinea pig in this phase! We also would like to set the tone for these future ‘wooncooperativen’. Because if those values get transferred, if those learnings get transferred, it will be much more accessible for a more diverse set of people. We all feel both in our daily lives and the political life of the city, how the city is becoming unreachable for ordinary people and ordinary budgets. This is why right from the start, we have decided that half of dNM will be social housing and the other half will be ‘woongroepen’, shared units. We extend the capacity of affordable housing to the entire building and not just a section of it. By doing so, we also want to show that individual independent units are not the only way of living. There’s a lot of affordability and luxury to be gained by sharing more facilities and spaces.

The legal and financial model

This is where we want to experiment with forms of communal living for the 21st century. We are looking backwards to also learn from mistakes. One difference that strikes me is that we are not in a rural project. We are [embedded] in the community and the city where we are based. And the configuration –the legal structure around it– is neither informal squat nor equity-based corporative. This building will be taken out of the market forever. We will be its renters and its occupants, but we won’t be able to claim a share of it, to be able to benefit financially. On the contrary, the value that is generated will be getting back to the community and will enrich all our lives and future generations.

The way the building is financed and the right to access it as housing are completely separate processes. We are not expecting people to be able to buy or show that they can afford to buy this place. We are trying to raise the finances by its political and social mission –where the money is– whereas the spaces will be allocated to people who have the needs. Rarely in our city and our society, the needs and the available finances meet at the same people. So we have to go look for it in different places.

Around the courtyard, we have all the social housing, independent units. Some of them will be duplexes, with high ceiling spaces that are very inviting and interacting with the courtyard. On top of the communal lobby imagine five floors of living groups. Each floor is occupied by a 5/6-people living group, with different characteristics, with different daily lives and modalities that they will come up with. You will be both a part of a living group, and a bigger community, and a bigger neighbourhood, all at once. We also want to make the non-housing function –which occupies the most accessible front part– to be occupied by innovative, democratic workplaces. Because we can always have all the cooperative housing we want, but we also want to lead the way by showing democratic economic forms where the neighbourhood can benefit, the workers can benefit, and the community here will be also part of.

I have to mention the architects! We have such an original and special relationship with the architects that we have. Instead of creating just [renders] of a very desirable building, they have been involved in our community, working with us in their free time all these years. It’s a bottom-up architecture practice that makes this both beautiful and sustainable building and the community possible.

The time is now

About the Author: Selçuk Balamir